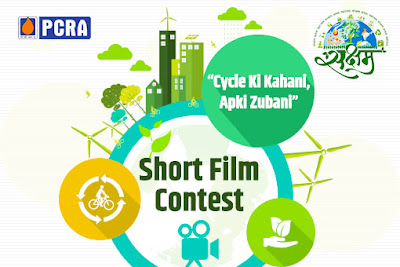 Cycle Ki Kahani Aapki Zubaani  On the occasion of Saksham 2019, Petroleum Conservation Research Association , under the Ministry of Petroleum and Natural Gas, has initiated to organize a Short Film Contest through MyGov. A Short Film Contest invites All Indian Citizens to make Short (maximum 3 minute) Films based on the Benefits of Cycling, Fuel Conservation and Environment Protection relating it to today and the future of India.
The objective of Cycle Ki Kahani Aapki Zubaani the competition is to make the General Public aware of the relevance of fuel conservation, which will help protect the environment for the future generations to come as well as to focus on various benefits of cycling to the environment and the people.
About the Competition:
1. The Short Film is open only for Indian Citizens
2.  The duration of the Short Film should be maximum 3 minutes.
3. Submission of the Short Film will start from 16th January 2019.
4. The Short Film can be made in any of the 22 Official Indian Languages with transcript (in verbatim) in Hindi or English.
5. The Panel of Jury, who will evaluate the contest, will be Experts on Environment Protection & Fuel Conservation and Film Making.
6. The winning entries will be announced on a later date on MyGov.
7. The last date of Submission will be 15th February 2019.
Last Date- Feb 16,2019 00:00 AM IST (GMT +5.30 Hrs)
Themes:
“Cycle Ki Kahani Aapki Zubaani”
Prizes:
1.The Top successful entries will be awarded by/with Cash Prizes.
First Prize – Cash Prize of Rs. 50,000/-
Second Prize – Cash Prize of Rs. 30,000/-
Third Prize – Cash Prize of Rs. 20,000/-
5 Consolation prizes- Cash Prize of Rs.10,000/- each
For any contest-related query, write to:
Petroleum Conservation Research Association (PCRA)
Ministry of Petroleum and Natural Gas
10, Sanrakshan Bhawan, Bhikaji Cama Place
New Delhi – 110066
Phone: 011 24369462
Email: competitions@pcra.org
FOR MORE QUERIES GO TO :-
https://www.mygov.in/task/cycle-ki-kahani-aapki-zubaani-short-film-contest

And follow this page for further new posts and updates.